Close to 900,000 booster or third dose COVID-19 vaccines have been administered by the HSE so far, putting Ireland in the EU top five for doses given per head of population.

HSE CEO Paul Reid said that last week alone, 214,000 of the 880,000 total were administered, noting that the public have “really embraced the booster programme”.

“It is probably like what we had seen at the beginning of the vaccine programme. There have been strong presentation levels,” he said.

Damien McCallion, HSE Vaccination Lead, said about two thirds (195,000) of healthcare workers have received their boosters so far and the majority of those eligible will have been offered an appointment or be vaccinated by the end of December. 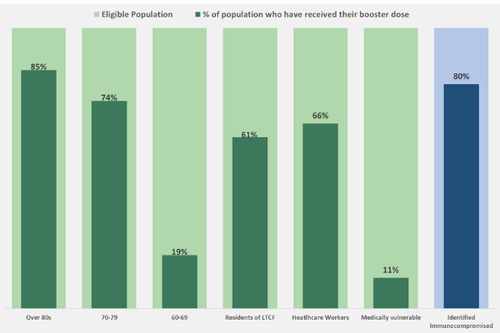 The vast majority of the over 80s have received their booster dose, with GPs having administered around 139,500 doses. The home vaccination service has been expanded to accommodate boosters for the housebound.

Over a quarter of a million in the 70-79 age group have been vaccinated through their GPs. The majority of those eligible will have been offered an appointment or be vaccinated by the end of this week or early December.

Boosters for the 60-69-year-olds began at the beginning of November and approximately 91,600 people from this age group have been vaccinated at vaccination centres. The majority of those eligible will be have been offered an appointment or be vaccinated by the end of the month.

Mr McCallion said it is expected that the 50-59 age group will begin getting their vaccine booster by mid-December.

He revealed that there has been a drop off in the volume of no-shows due to the scaling-up of the walk-in clinics. He said the nature of walk-in clinics when so many people were waiting to be vaccinated is that there would be a degree of queuing involved but the HSE continues to manage the situation so that long queues can be avoided where possible.

Paul Reid revealed that there are still people coming forward to get their first and second doses of the COVID vaccine.

“We are seeing the continued presentation of people for their first and second doses. Last week alone we completed just about 10,000 dose ones and over 10,000 dose twos in the population. This is a really important part of the protection,” he said.

He revealed that the unvaccinated are having a ‘really high, disproportionate impact’ on the healthcare system.

Dr Colm Henry, HSE Chief Clinical Officer, said there has already been a noticeable impact of the booster vaccine rollout on case numbers and hospitalisations.

“What we are seeing is a trend which is certainly a cause for hope. We are seeing a falling number of cases in those who have had access to boosters, particularly in the very elderly age group,” he said.

Dr Henry revealed that cases have dropped by:

He noted that the drop in numbers is also reflected in a decrease in hospitalisations from these older age groups.

Back to Staff News