Update from this week's COVID-19 briefing

The majority of eligible healthcare workers will be offered an appointment for their third dose of the COVID-19 vaccine.

The booster programme for healthcare workers, which began on the weekend of November 6th and 7th, has seen 100,400 doses administered to date. There are approximately 305,000 people in this group.

HSE CEO Paul Reid has said the rollout of the boosters was "progressing really well".

HSE Chief Clinical Officer Dr Colm Henry said they have already seen a steadying of incidence rates in older people who have had the booster shot.

Mr Reid noted the continued benefit of vaccination, despite the high levels of hospital and ICU admissions.

Over 65s in long-term residential facilities have almost all had their booster shot, with 24,000 people out of the 25,000 vaccinated. Some facilities will need to be revisited due to outbreaks.

GPs have administered 132,000 doses to the over 80s and the target is to complete all estimated 161,000 in November. The home vaccination service has been expanded to accommodate boosters for the housebound.

In the 70-79 age group (estimated population size of 336,000) 130,500 have been vaccinated through their GP to date. The majority should get their booster or have been offered an appointment by the end of November. 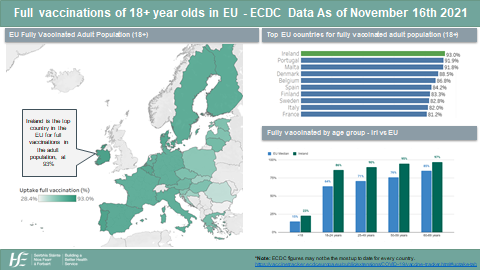 Back to Staff News